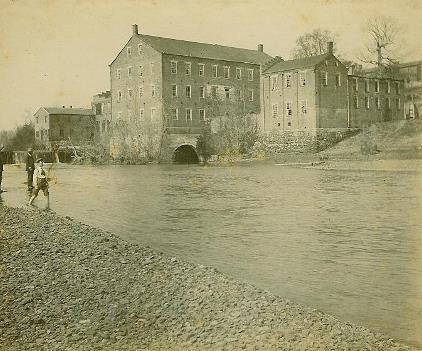 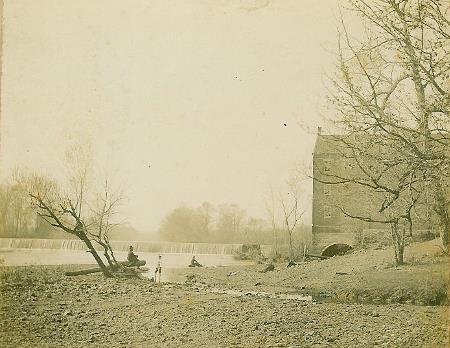 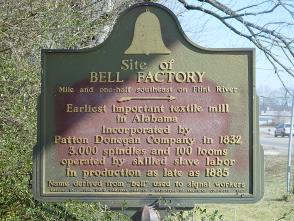 This marker, placed by the Judge David Campbell chapter of the Daughters of American Colonists was unveiled on 27 Oct 1957. It stands approx. 10 miles northeast of Huntsville on Winchester Road, directing visitors to the location of the Bell Factory on the Flint River. 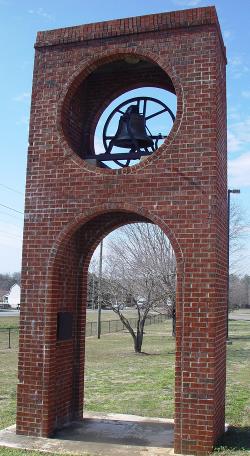 This is the current tower in front of Riverton School which houses the bell used by the textile mill. 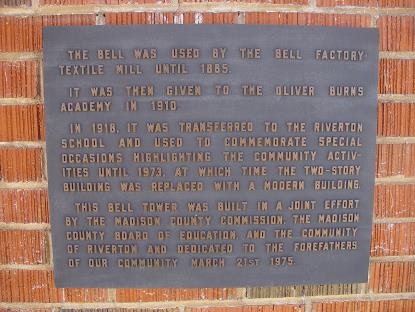 This plaque is inside the Bell Tower in front of Riverton School on Winchester Road northeast of Huntsville, Al.

Bell Factory was among the earliest textile mills established in the State of Alabama and Madison County, being incorporated by an act of the Alabama Legislature in Dec. of 1832 for $100,000. Patton-Donegan & Company purchased 100 acres of land on 1 Mar 1834 from Preston and Agnes N. Yeatman, Germanicus and Arabella Kent, and Isaac and Eliza L. Williams for $20,000. It stood ten miles northeast of Huntsville on the Flint River a short distance south of Winchester Road on Bell Factory Road. The mill operated until about 1885 except for a brief period during the Civil War.

Charles Grayson Summersell states in his Alabama History for Schools, “As a young man Patton (Robert M.) operated one of the first cotton gins in Alabama and was a founder of Bell Factory,” later becoming governor in Dec. of 1865. The other partner was J. J. Donegan according to the signature on the deeds.

Raw cotton was plentiful in the pioneer days and for years afterward. Converting the ginned cotton into marketable merchandise was the next step. E. C. Betts, in his Early History of Huntsville, 1916, found that: “The most noteworthy single industrial development of the times was the ‘Bell Factory’.” This was the first plant which converted the raw cotton product into yarn and cloth for large scale commercial purposes. Dwight M. Wilhelm states in his History of the Cotton Textile Industry in Alabama that the products of the factory were “sheeting, plaids, ticking and yarn.” The New Orleans Times-Picayune of 18 Sep 1849 contained the following: “The first samples of Southern manufacture ever sent, it was believed, to the New Orleans market, consisted of cottonades, ginghams, osnaburgs, drillings, sail duck, bed ticking, striped shirting, etc., from the ‘Bell factory,’ Huntsville, Alabama, [and] were available to dry goods merchants at Messrs. Fearn, Donegan & Co.”

The facility was composed of three thousand spindles and one hundred looms, driven by water power. The water from a dam on the Flint ran through a mill race or trough, turning a wheel rimmed with buckets. A shaft connected to the wheel was geared to turn the machinery inside the mill. The mill building containing the machinery had three and a half stories, plus a water wheel room under the ground floor. Several two story buildings used mostly for housing workers were also on the property. A store and warehouse were maintained in Huntsville on the Square during the time of manufacturing at the factory.

The plant was named for the large bell used to signal the beginning and end of work periods. The normal steam whistle used in most factories of the day could not be employed since only river water power was employed. The bell was given to the Oliver Bierne Patton Academy in 1910. Riverton School received it in 1918 to be “used to commemorate special occasions highlighting the community activities until 1973.” The bell was place into a tower in front of the school when a new building was built and dedicated in 1975 and proudly hangs there today.

The following list was taken from a time book ledger of the factory for the years Jan 1839 to Dec 1841. It is accessible at the Heritage Room of the Huntsville Public Library. Most of the labor in the early years was performed by slaves. The individuals listed in the book as “boys” were slaves. Their owners were paid for their labor. The slaves of the company partners are not listed. The ledger shows the days that each person worked but only their names are included below.

Towards the end of the ledger a few more workers are listed for the year 1866 and appear as follows.

Deed Book A, page 8, located in the Madison County Records Room, in the Huntsville Public Library.