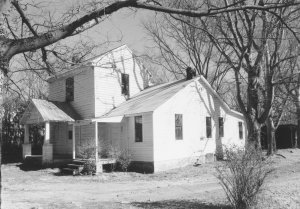 In 1970 a very rare item was discovered on Banister Alley - a small one-room over one-room Federal Period clapboarded house of perhaps 1820-35. The house appears on the 1861 map and its details and construction methods confirmed its period without question. The house had been disguised by a small bungalow porch and a late-Victorian west wing. The details of the house were a great aid in the research for accurately reconstructing the Alabama Constitution Village clapboarded small houses of the Federal Period and similar design and size.

The second floor of the house was accessed by an exterior stair under the roof of the shed-roof back porch (later enclosed). This exterior-stair feature can also be seen at the circa 1820 Mooresville Stage-Stop, so it must not be as unusual for small houses of the period as might be thought.

In the 1980's a failed effort to jack up the little Federal Period house for repairs resulted in its collapse and subsequent demolition, and thus the Twickenham District lost a unique example of the type and period. The house now at 306 Banister Alley SE is a 1980's approximation of the lost house. The original house and its details are documented in the photographs of Harvie P. Jones, FAIA.