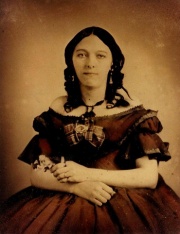 In a little family cemetery behind the Casa Blanca Restaurant on Brown’s Ferry Road just west of Hughes Road are two headstones for “Amanda C., Wife of B. G. Camper”. Both show the birth date of Oct. 1, 1885 and a death age as “about 49 years”. Both have the epithet as “Tho lost to sight, to memory dear”. The stones are not quite identical, as the scroll designs at the tops are inverted and the sentence wording breaks on the lines of the epithets are different between them. Other than that, and the fact that the stones are separated by about 25 feet on different graves, they are obviously to commemorate the same person.

Amanda Carnes Camper was a beautiful but determined-looking and richly dressed woman, according to her photograph in the Madison sesquicentennial book “Memories of Madison, A Connected Community, 1857-2007”. She married Blooming Goodner (“Goodwin”, per marriage license, but called “Dunc” for “Duncan” by the family) in 1865. The 1860 census shows “Mandy” at age 21 in the household of her father William. Two houses away was the family of wagonmaker and mechanic Benjamin L. Camper, whose son Blooming G. was listed as age 14. The 1880 census shows Amanda’s age as 44, while her husband “Duncan” is given as age 34 in that year. Either way, Amanda married a younger man – contrary to custom for the time.

Amanda’s father-in-law had descendants who were significantly involved in the business and news of the area in the “old days”. One of the Campers owned the Twickenham Hotel in Huntsville for a time, and he also had an exclusive men’s tailoring shop. Another in the 1920s and 1930s owned the impressive Lanford – Slaughter mansion just north of Old Madison Pike on the east bank of Indian Creek, as also illustrated in the Madison sesquicentennial book. Yet another was involved in a notorious murder here, while another descendant provided land for a public schoool at the junction of Slaughter Road with Old Madison Pike, behind the location of the service station located there today. In fact, there was even another Camper family cemetery (now destroyed) in that area, on the east side of Slaughter Road, where it is known that Blooming’s parents and a sister are buried.

During her short lifetime, Amanda Carnes Camper herself became the mother of several children, including daughters Ollie and Betty Hester. These daughters both married Madison resident Luke Landers, but not at the same time. Ollie married Luke in 1882, but she died in 1894. It was in 1910 that Betty Hester Camper married Luke Landers. Betty’s tombstone has the most recent burial date (1955) of any in the Camper Cemetery (originally the Farrald family cemetery) behind Casa Blanca. In fact, Betty’s tombstone is very near the southernmost headstone for Amanda. The mystery of the dual headstones for Amanda was finally solved by contact with descendant Julius Walter Camper of Maryville, Tennessee. He related a story about the cemetery’s tombstones all having been stolen many years ago. An ad was placed in the local newspaper by the family, stating that if the stones were returned by a certain date, then no questions would be asked. If not, then a significant monetary reward would be paid for information leading to the arrest and conviction of the culprits.

The stones were returned, but while the headstones were being emplaced again the family split in a dispute about which grave was Amanda’s. The two sides could not agree, so another stone was procured, and both factions erected a headstone where they thought she was buried. After hearing the story, I decided to look again at the graves. It was then that I found a footstone at the grave in the middle of the cemetery where Amanda’s northernmost headstone was located. Careful examination of the footstone revealed the initials “AGC”. The initials were definitely not “ACC”, as would be expected for Amanda Carnes Camper. A check of Dorothy Scott Johnson’s Volume 1 (1971) of her book series CEMETERIES OF MADISON COUNTY, ALABAMA, showed a listing for Annie G. Camper, daughter of B. F. and P. F. Camper. The grave is located within a bordered area for the family of B. F. Camper, and furthermore, the grave is not quite adult-sized. Dot Johnson’s book shows that Annie’s life span details were lost from the stone when she saw it, but the 1880 census shows her as age 12. It would fit that Annie died as a teenager and is buried at the northernmost grave marked for Amanda, while Amanda is near the south end of the cemetery, where the other marker is located. Apparently, Annie’s headstone was never returned, and the family failed to notice that she was “missing”, but at least we now know where Amanda is located.