One of the earliest grist mills in Huntsville's pioneer time was owned by Adam Hall, according to the book History of Madison County written by Judge Thomas J. Taylor in the 1880s. Adam reportedly came to Huntsville around 1815. The mill was probably located in his 300-acre plantation on the west side of old Huntsville. In the early 1800s that farm was called Hall's “Brahan Plantation” property, generally positioned between Holmes and Governors Drive today, west of Monroe Street and the Von Braun Center. In fact, Hall had another 300-acre property “on the mountain southeast of Huntsville” and still more “about a mile east of Huntsville,” plus several town lots and houses. His businesses included a grocery run by Robert Graham, as well as farms raising cattle and hogs and selling firewood from the land. Both of his larger farm properties had “plantation houses” on them, and the grocery was in a brick house in Huntsville on a large lot.

However, in spite of prosperity, Adam's family life was not stable. His wife Sarah Monroe Hall filed in Chancery Court for divorce on August 15 of 1845. She and Adam were married on December 24 of 1829, and each owned significant property before their marriage, with strong indications that they must have already had children by prior spouses. Both Adam and Sarah owned several slaves before their marriage. In her petition to the court (Case #245) as documented in Record Book O, pages 252 – 265, Sarah provided a detailed listing of the properties held by each before the marriage. This listing included the names, genders, and ages of each slave, as well as descriptions of the land and houses, etc.

Sarah's basis for seeking her divorce from Adam was abandonment. She stated that Adam had ceased to protect and provide for her since September of 1844 and that he had left their house with statements that he would never live with her again. Later testimony in Adam's rebuttal revealed that he had moved into the house on his “Brahan Plantation” to live apart from her, but he had not sought a divorce or legal separation from Sarah. Adam's rebuttal basically detailed alleged faults that Sarah brought to the marriage relationship and especially during their separated period. Most of her shortcomings were said to be related to an extravagant lifestyle and unrealistic expectations.

Sarah was represented in court by the legal firm of Clay & Clay, but the suit was specifically filed by her “next friend” Joseph Holloway. The core of the case involved an alleged “ante-nuptial” (“pre-nup”) agreement that both parties had reportedly agreed upon prior to the marriage in 1829. That agreement was apparently verbal, as no such legal document was introduced into evidence. Sarah's claim was that the agreement stipulated that each party “... should respectively retain & enjoy ... their said property” that was owned individually before the marriage. It further was claimed that the agreement “... in substance ...” was “... That the right of property of [Sarah, the Complaintant], and that of [Adam, the Defendant], as owned and held before marriage, should remain with and belong to each respectively, but during their joint lives should be used by [Adam] for their joint benefit and mutual support and subsistence.”

Net profits from the use of the property were to be divided equally, and the increase of the property {aka children of the slaves} of each was to stay with the respective owner. At death of either party, the survivor was to retain use of all of the properties until their own death, at which time the estate would be divided to the heirs of each in proportion to the original owner's contribution to the joint ownership. Sarah obviously did not want to await Adam's death (which occurred in August of 1857), so she requested the court to implement the agreement as she stated it to be in 1845. This request was possibly precipitated by Sarah's claim that Adam had not only “...left her no horses or means of conveyance,” but he had also “... threatened to sell her negroes.” Her plea was for the court to force Adam to surrender her property and her share of proceeds thereof in granting a divorce. 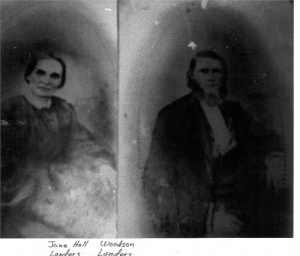 Parents of Woodson C. Landers of Madison. (Jane was a Williams, daughter of Christopher B. Williams and his wife Margaret Hall, who was a daughter of James Hall, the brother of Adam Hall.)

Sarah had her security or bond to cover court costs posted by Allen Walls and her “next friend” Joseph H. Holloway. On June 3 of 1846 the court rendered its final verdict in Case 245 after hearing from both sides and their witnesses. In summary, the bill of complaint was dismissed by mutual agreement of the principal parties. Both Adam and Sarah were to share the court costs by that settlement agreement. By this result of the case one might assume that the marriage was healed, but that really did not prove to be the case. After Adam's death in 1857, the executors of his Last Will and Testament filed suit against Sarah and the heirs of his estate. That case revealed more information about what happened between Adam and Sarah between 1846 and 1857, and a renewed marriage commitment was not the situation. The feuding apparently was not finished, but that is a story for another time of writing, as recorded in Chancery Court Record Book U (1857-1881), pages 335-540, and in Record Book W (1883-1884) beginning at page 116 and continuing. For now, it should be noted that Adam's only surviving brother, James Hall, was a primary heir. James' great-great grandson Woodson C. Landers was a resident of the town of Madison and was mentioned several times in the subsequent court case about the Adam Hall estate. Woodson Landers or one of his descendants is probably the namesake of Landers Road, between Mill Road and Brown's Ferry Road in Madison.