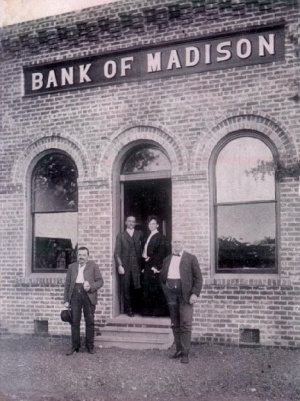 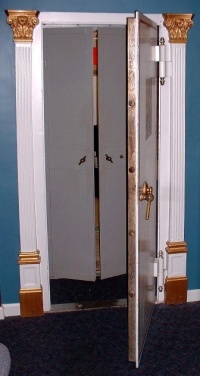 The building at 204 Main Street in Madison has hosted a variety of businesses. During recent times, it was the office of the Madison County Record newspaper and later the Madison Chamber of Commerce. It also was the office of Madison's Water Department for a period. As of 2006 the interior features still included the old safe of Madison's first bank, incorporated in 1905. The safe was actually more like a multi-level vault for safe deposit boxes of this time. The entrance into the room was through a heavy and thick steel door with a Mosler lock on eight points of steel bar pins. Annual inspector's stickers from the 1920s and later verify the time lock integrity. They were still attached inside the vault. Behind the first vault door was a lockable double panel steel door before entering the final room, which contained two safes encased in concrete. These two safes had small doors with Victor combination locks. One Victor metal plate shows the latest patent date of the lock as December 1, 1908.

The bank placed newspaper ads claiming that it was “unrobbable” and protected not only by the latest technology in time locks but also by the famous Pinkerton Detective Agency. However, in the draft of an unpublished book entitled “Reflections of Madison, 1869-1999”, Gladys True wrote that the bank was in fact robbed (or at least burglarized) in 1928. In describing the significant events in the town for the decade of 1924-1934, Gladys used the heading “Crispy Bills” for the story. In her own words, Gladys wrote “The first bank robbery occurred in 1928 at the Bank of Madison, which was run by a Mr. Riddle. Actually, what the robbers did was to break into the bank vault using a torch. Some of the money showed up later, and everyone knew it was stolen since it bore scorch marks in various places.”

“Walton Hughes and Tommy Christianson had heard a rumor from Huntsville that a robbery was planned, so they posted themselves on the drugstore rooftop the night it was supposed to occur, hoping to surprise the robbers. They stayed there until morning, when they were convinced the robbers had decided not to follow through with their plans. What a surprise they had when the robbers came on another night while they were at home relaxing.”

Gladys' account came from her notes of recollections of “Senior Citizens of Madison”, per the introduction of her book. Gladys herself came to live in Madison as a young bride in 1933, so her knowledge was not first-hand regarding this event. The Bank of Madison is depicted in several old photos, going back to a time when Matthew Harvey Anderson was it president and George Washington Wise was its vice-president. A 1909 picture postcard shows John Mullins Burton (the town pharmacist) standing in front of the bank beside Harvey Anderson. Cashiers Si Hager and his wife Lula are shown in the doorway. The December 17, 1913 special issue of The Weekly Mercury newspaper dedicated to the history of Madison states that the bank was considered to have “absolute protection against damage by fire, dynamite, or burglary....” It was stated as also carrying “insurance against burglary, hold-up, and damage”. The article listed the officers of the bank as G. W. Wise, president; C. C. Green, vice-president; and cashiers Mr. and Mrs. L. S. Hager. It further listed the bank's directors as M. H. Anderson, G. W. Wise, Herman Humphrey, T. G. Riddle, F. G. Hertzler, C. C. Green, and L. S. Hager. Hertzler was Anderson's brother-in-law. Riddle was the local school principal from 1902 through at least 1914. He also sold real estate, buggies, and harnesses. He was a teacher in Hazel Green in 1900 but in Madison in 1910. By 1920 he was listed as a farmer in the census, while his son Harry Riddle was listed as a banker, both living in Madison. In 1930 Harry was enumerated on 13th Avenue in Birmingham, with his occupation given as collections manager for an investment corporation. Bank security seems to have always had its problems.